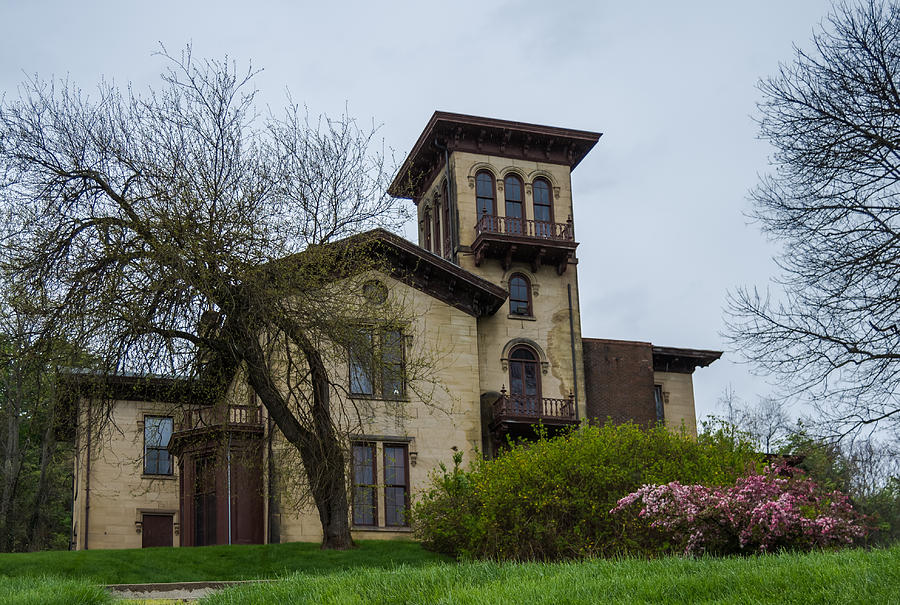 This photograph of the Anchorage was taken in April of 2015. The angle of this shot was captured from the front of Harmar place on a rainy day. When viewed closely you can actually see the rain falling in the photograph. This is one of the many historical buildings that you can find in Marietta, Ohio.

Douglas Putnam got rich in the years leading up to the Civil War by investing in real estate and the first railroad to connect Parkersburg and Marietta. He used his money to build a spacious home for his second bride, Eliza Whipple Putnam. The Tuscan-style villa on Putnam Avenue (originally called Putnam Place) took ten years to build and cost $65,000--a huge sum at the time. When it was finally completed, Eliza moved in and promptly died from heart disease at the age of 53, on September 9, 1862. But some say she loved the house so much that her spirit never left.
Over the years it has passed from owner to owner. Various families have called it home at different times. A nursing home used the complex, including the mansion, to house patients; it was at this time that it acquired the name the Christian Anchorage, because of its distinctive, anchor-shaped driveway. Even after the nursing home sold it to Marietta Memorial Hospital (who then sold it to the Washington County Historical Society for one dollar), people continued to refer to it as The Anchorage.

Residents and employees at the nursing home reported sightings of Mrs. Putnam's ghost on numerous occasions, usually at a window or on a staircase. She seems to be dressed in a long dress, and looks melancholy as she wanders the home her husband built her. She designed the place, after all--she asked that it be modeled after a picture she'd seen in a book of a house on New York's Hudson River.

Another rumor attached to the house is that it was used by the Putnams as a way station on the Underground Railroad. Supposedly a tunnel leads from the subcellar to a steep bank on the Muskingum River, just up from its confluence with the Ohio. This seems unlikely, since such a tunnel would have had to have been pretty long. Also, it's a widespread misconception that the Underground Railroad really involved a lot of literal underground activity. Mostly slaves were hidden in a back room and fed, clothed, given a place to sleep. Tunnels were very rarely involved. There's just something about the term Underground Railroad that makes us think of subterranean passages.

Wonderful image! Congratulations on your feature in the “Landscape and Landmark Photography” group!