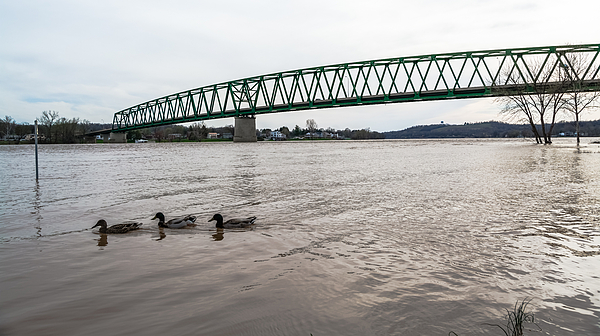 Our shower curtains are made from 100% polyester fabric and include 12 holes at the top of the curtain for simple hanging from your own shower curtain rings. The total dimensions of each shower curtain are 71" wide x 74" tall.

This image was photographed from Marietta, Ohio on April 10th of 2015. After several days of rain the Ohio River lever was above flood stage. These... more

Thank you Fei A!

Thank you Carol! Not sure who had better timing, me or the ducks but I was thankful they were there when they were.

This image was photographed from Marietta, Ohio on April 10th of 2015. After several days of rain the Ohio River lever was above flood stage. These three mallard ducks happened to swim by while the shot was taken. Where they are swimming is where the bike trail in marietta is but it is covered by the high water. You can see the sign for the bike trail just beyond the ducks. The original bridge at this site was constructed in 1903. It was the first inland cantilever highway bridge in the United States and also site of the first strike, in 1902, by the United Steel Workers union. The current Williamstown Bridge was completed in 1992. It reuses some of the piers from the prior bridge. This bridge is a continuous truss, the 28th-longest in North America.